Previous presentation at conference: This article was presented at the Sociey for the Study of Pain Annual National Conference on July 22–23, 2021, in Nigeria.

Neuropathic pain (NP) is an intractable consequence of lesion or disease to the somatosensory system that results in detrimental psychosocial life of the affected patients. It has been estimated that NP affects 7 to 10% of the world population [1]. NP is characterised by hyperalgesia, allodynia, and anxiodepresive cormobidities [2,3]. Treatment of NP has proved difficult, as only about 2% of current drugs used yielded 50% pain reduction in addition to adverse side effects [1,3]. The multifaceted mechanisms involved in the development and maintenance of NP make it challenging to diagnose and treat successfully.

The roles played by elevated levels of proinflammatory mediators released by the traumatised nerve and non-neuronal cells (glial cells, infiltrating macrophages, monocytes, and T-lymphocytes) increase the neuronal sensitisation and potentiations [4,5]. Tumour necrotic factor-alpha (TNF-α) and interleukin-1-beta (IL-1β) play an active role in the advent of NP by mediating mechanical allodynia and thermal hyperalgesia [6,7]. The involvement of the reactive oxygen species (ROS) in NP has been well established. ROS and reactive nitrogen species (RNS) released from increased activities of the damaged sensory neurons and non-neuronal cells result in synaptic remodelling and functions that mediate allodynia and hyperalgesia. ROS and RNS increase the expression of sodium ion channels, excitatory receptors, and neuronal disinhibition. All this mediates increased sensitisation and a reduced neuronal threshold to nociceptive stimuli [8].

Acetaminophen (N-Acetyl-para-aminophenol) is a derivative of p-aminophenol from the metabolite of acetanilide and phenacetin. It is a multimodal analgesic agent with reduced opioid-related side effects [9] and an antipyretic function [10]. L-carnosine is a histidine-containing dipeptide molecule synthesised naturally in the liver from β-alanine and L-histidine [11]. It is widely distributed in various tissues of the body, including the nervous tissue. It is has been reported that L-carnosine possesses a proton buffering effect [12] and acted as an antioxidant via scavenging of free radicals and singlet oxygen and chelating with heavy metals [11,13].

This study was consonant with the ethical guideline in animal experimentation outlined in the 2019 updated ARRIVE (Animal Research: Reporting of Experiments) [14]. All experimental procedures were approved by the University Ethical Review Committee (UERC) of the University of Ilorin (approval number: UERC/ASN/2016/369).

Fifty-six male Wistar rats weighing 150–200 g were used for the study. The sample size was estimated with the aid of SigmaPlot version 12 software (Systat software, Inc., Chicago, IL). The statistical power of 80% at an alpha level of 0.05 was used for the estimation. Based on a previous study on the paw-withdrawal latency to the hotplate, a sample size of eight per group was derived. The animals were randomly hand-picked and grouped into seven. They were housed and acclimatised in the animal facilities of the Faculty of Basic Medical Sciences with free access to food and water.

Peripheral neuropathy was induced using the CCI model as described by Bennett and Xie [15]. Briefly, the animal was completely anaesthetised with xylazine and ketamine hydrochloric (100 mg/kg intraperitoneal injection [i.p]). The proximal back of the left hind limb was shaved, sterilised, and dissected to expose the main sciatic nerve. Four loose ligatures (4-0 ligating silk) were placed around the sciatic nerve, approximately 0.5 mm apart before the trifurcation. The muscle and skin were subsequently sutured back in layers, and penicillin powder was applied to the wound after sutured to prevent infection. The rats were returned to their respective home cage after recovery with free access to food and water. The animals were only dissected and sutured back without ligatures on the sciatic nerve in the sham group operation.

Animals were treated with oral administration of either normal saline/acetaminophen/acetaminophen + L-carnosine once daily for twenty-one consecutive days. Post-treated groups were administered their respective treatment three days after surgical induction of NP and continued for the next twenty-one days. Pretreated groups were treated for seven consecutive days before induction of NP and continued subsequently. The study groups include:

Pain behavioral assessment was done to investigate the antinociceptive effects of the treatment on thermal hyperalgesia and mechanical allodynia. Baseline tests were carried out before CCI and three days after CCI. Pain behaviour was further monitored on the 3rd, 7th, 14th, and 21st day of treatments.

A hotplate test [18] was used to evaluate the thermal hyperalgesia in each treatment group. Briefly, a hotplate with a restricting pyrex cage, 30 cm high, with the temperature set and maintained at 55°C ± 0.5°C was used. The rats were dropped gently on the surface of the hotplate. The time taken by each rat to either flinch, lick, or jump out of the pyrex enclosure was recorded chronologically with a stopwatch, and taken as paw withdrawal latency (PWL).

Responses to the mechanical bending force of various strengths of von Frey filaments were used to assess mechanical allodynia as described in the author’s previous study [18]. Animals were placed in a transparent Perspex cage with a wire mesh floor and allowed to rest for 15 minutes. Von Frey filaments grading 1.4 g, 2 g, 4 g, 6 g, 8 g, 10 g, 15 g, 26 g, 60 g, and 100 g bending forces were applied individually to the plantar surface of each ligated hind paws of rats in ascending orders. The paw withdrawal threshold was defined by the mechanical force (in gram) that produced ligated hind limb withdrawal, licking, or flinching in three consecutive trials. Von Frey filaments that produced a lifting of the whole hind limb without sudden withdrawal, licking or flinching were taken as a positive response.

Haematoxylin and eosin (H&E) stain as described by Muthuraman et al. [22] was used to investigate the neuronal architecture of the sciatic nerve. Briefly, the sciatic nerve was excised from the rat following trans-cardiac perfusion with phosphate buffer and formalin. The tissues were fixed in 10% formalin solution and blocked. They were sectioned longitudinally into 5 μm before staining with H&E and observed under a high-power light microscope. Images were acquired from the microscope by using Leica ICC50 E Digital Camera (Leica Microsystems, Wetzlar, Germany) connected to a computer and analysed with Armscope software version 3.7 (Amscope, Irvine, CA). 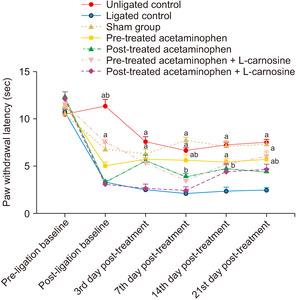 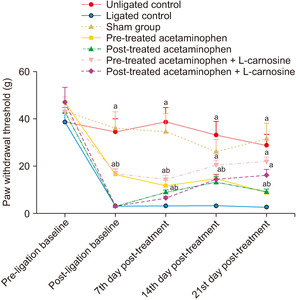 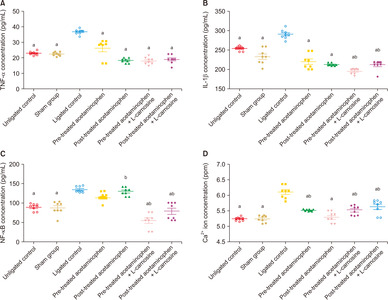 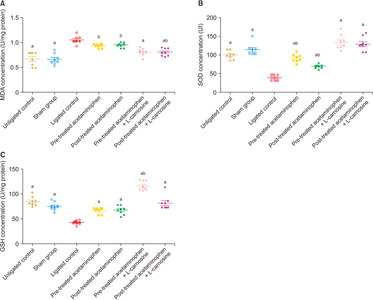 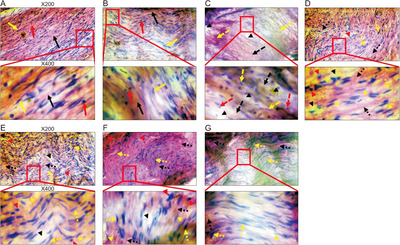 The treatment of NP remains a challenge worldwide. This study reports the antinociceptive effects of combined administration of acetaminophen and L-carnosine in chronic constricted injury-induced peripheral neuropathy.

Hyperalgesia and allodynia have been reported to be mediated by the increased advent of proinflammatory cytokines [4,7]. Excercabation of NF-κB promotes the production of TNF-α and IL-β. Coadministered acetaminophen and L-carnosine effectively reversed increased TNF-α and IL-β in the ligated animals. This may be due to their effects on NF-κB and calcium ion concentration. TNF-α and IL-β have been widely reported to mediate hypersensitivities by increasing neuronal excitation and lowering the neuronal threshold [6,7]. They are involved in synaptic remodelling leading to increased neuronal hyperexcitation [6,23]. A single treatment with acetaminophen alone led to reduced TNF-α and IL-β but not via the NF-κB pathway. Enhanced NF-κB is associated with increased excitatory synapses, neuronal hyperexcitability, and disinhhibition [24,25]. Hence the improved antinociceptive effects of combined acetaminophen and L-carnosine are mediated via anti-inflammatory activities in mitigating NF-κB.

ROS play a pivotal role in the development of hyperalgesia and allodynia [8,26]. Agents that possess antioxidant properties have been reported to be effective in treating NP. Therapeutic agents targeting oxidative stress improve NP via scavenging the ROS [27,28]. This study was in consonant with a previous study that showed that CCI is characterised by increased oxidative stress [26]. A combined dose of acetaminophen and L-carnosine ameliorated increased oxidative stress as indicated by a marked reduction in lipid peroxidation in the spinal cord. Combined acetaminophen and L-carnosine also stimulated the production of antioxidant enzyme (SOD) and reduced GSH that mopped up ROS. This further explains the combined potential of the two therapeutic agents that mediated their antinociceptive properties. Antioxidant properties of the combined treatment are evidence of the structural integrity of the sciatic nerves. Improved structural architecture of the sciatic nerve with combined acetaminophen and L-carnosine indicated a high degree of neuroprotection that manifested the observed antinociceptive properties. Increased lipid peroxidation results in distortion in neuronal integrity and derangement in nerve conduction. Pretreatment with combined acetaminophen and L-carnosine showed a better neuroprotective effect which may be due to increased antioxidant properties via increased production of reduced GSH.