Low back pain (LBP) is one of the most common reasons why individuals visit hospitals [1]. If pain in the low back lasts for more than three months, this condition is generally defined as chronic LBP. Chronic LBP causes disability, absences from the work force, and economic loss [2]. Despite today’s advanced diagnostic methods, the underlying etiology cannot be elucidated in most patients with chronic LBP, and these cases are identified as nonspecific LBP [3]. Structural changes in one or more of the facet joints, intervertebral discs, ligaments, and paraspinal muscles are thought to be factors underlying the etiology of nonspecific LBP [4]. Thus, clarifying the underlying etiology in nonspecific LBP is very important to create specific treatment protocols [3].

Nonetheless, a limited number of studies have investigated the factors that may affect the CSAs of paraspinal muscles, especially in terms of how the CSA may be decreased in patients with chronic LBP in comparison with individuals in control groups or how it may be decreased on the painful side in comparison to the side without pain [9-11]. Therefore, in this study, we aimed to examine the relationship between the CSA of paraspinal muscle, as well as age, sex, body mass index (BMI), level of physical activity, risk of sarcopenia, posture, and type of disc herniation. This study was also performed to examine the effect of muscle CSAs on the severity of LBP and disability.

This study was approved by the local institutional ethics committee of University Health of Scienc e Dıiskapi Education and Research Hospital (DERH 2021-106-18), and was conducted in accordance with the Declaration of Helsinki guidelines. Informed consent was obtained from each participant before starting data collection.

This single-center cross-sectional study was conducted on 164 patients with chronic LBP who were admitted to our physical medicine and rehabilitation outpatient clinic between May 2020 and October 2020. Patients between the ages of 18-65, with LBP for more than 3 months, who were ambulatory with or without a walking stick, and who could speak Turkish, in order to complete the questionnaires, were included. Patients who had received physical therapy or injection for low back in the previous 6 months; patients with inflammatory, severe metabolic, endocrine, cardiovascular, pulmonary, genitourinary, gastrointestinal, and progressive or non-progressive central or peripheral neurological diseases; and patient who had a history of spinal cord compression or radiculopathy, spinal structural deformity, lumbar instability, trauma to the lumbar region, osteoporotic fracture, lumbar surgery, malignancy, pregnancy, or lactation were excluded from the study.

The CSAs of the paraspinal muscles were calculated for each patient at the middle point of the L2-3, L3-4, L4-5, and L5-S1 intervertebral discs by magnetic resonance imaging (MRI) slice as cm2, similar to previous studies [5]. All calculations were done using a 1.5 Tesla MRI scanner (Siemens Medical Systems, Erlangen, Germany) with 5 mm slice thickness and a close polygon region-of-interest tool. The Image J 1.53 software program (produced by Wayne Rasband, United States National Institutes of Health, Bethesda, MD) was used to trace the contour of the muscles of interest on axial T2-weighted MRI images for all CSA measurements. To determine the CSA of the muscle, its location of attachment with the fascia was manually marked using a freehand selection pointer and a touch screen pen on the touch screen monitor. The software automatically measured the area [1,10,14]. We chose to examine muscle CSA on the right side for standardization purposes (Fig. 1). The CSA measurements were made by two different clinicians, who were unaware of the clinical evaluation, and then the two measurements were compared and a value was recorded. Additionally, the type of disc herniation was evaluated as normal, bulging, protrusion, extrusion, or sequestration with MRI views [15]. 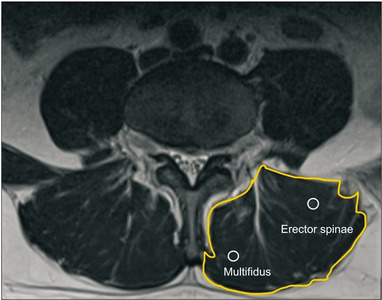 Pain intensity was evaluated using the 100 mm visual analog scale. The disability levels of the patients were measured using the Quebec Back Pain Disability Scale, which is a condition-specific questionnaire consisting of 20 questions scored between 0 and 5 points. High scores indicate high disability [16].

The patients’ posture was evaluated using the New York Posture Rating (NYPR). By assigning scores between 0 and 100, the NYPR scale evaluates body segment images; back views of the head, shoulders, spine, hips, and feet; and lateral (left side) views of the neck, upper back, trunk, abdomen, and lower back. Low scores indicate poor posture [17].

The International Physical Activity Questionnaire - Short Form was applied to assess the physical activity status of the patients. This scale, which evaluates the intensity of physical activity and sitting time as part of people’s daily lives, is used to estimate the total physical activity in MET-min/week and time spent sitting [18]. According to their physical activity levels, the patients were divided into 3 groups including sedentary, minimally active, and very active individuals [19].

A simplified screening tool was used to assess and screen for the risk of sarcopenia (SARCF), which can affect muscle mass. SARC-F is a self-administered questionnaire used to determine the level of difficulty experienced along 5 components: strength, assistance in walking, getting up from a chair, climbing stairs, and falling. The total score ranges from 0 to 10. Patients with a SARC-F score of ≥ 4 are considered ‘at risk for sarcopenia’ [20].

Data were analyzed using the SPSS ver. 22.0 (IBM Co., Armonk, NY). The variables were investigated using visuals (histograms and probability plots) and a Kolmogorov–Smirnov test to determine whether they were normally distributed. In reporting descriptive statistics, the data were expressed as mean ± standard deviation and median (minimum-maximum) for continuous variables and as frequency and percentage (%) for nominal and categorical variables. Spearman and Pearson correlation tests were used to examine the relationship between demographic, clinical, radiologic characteristics, and paraspinal CSAs. One-way analysis of variance tests were used to compare paraspinal CSAs among the patients’ physical activity level and BMI status. When an overall significance was observed, pairwise post-hoc tests were performed using Tukey’s or Tamhane tests. The differences in paraspinal CSAs between genders, between patients with sarcopenia risk and normal patients, and between patients with different 25 (OH) D3 levels were analyzed using independent samples -tests. Using age as a covariant factor, the differences of paraspinal CSAs between women and men; patients with different physical activity levels: healthy weight, overweight and obese patients; patients with and without the risk of sarcopenia; and patients with different 25-(OH) D3 levels were examined using the analysis of covariance (ANCOVA) tests. BMI was taken as a covariant factor, and the differences between paraspinal the CSAs of the two genders were examined using ANCOVA. The effects of lumbar paravertebral CSAs on pain severity and disability were examined using univariate linear regression analysis. For statistical significance, a value of < 0.05 was accepted.

Table 1 . General characteristics of the patients

Our study did not find a relationship between the type of disc herniation and the mass of paraspinal muscle. A few studies have examined whether changes in the paraspinal muscles are associated with structural changes in the spine [26,29]. One study found a significant association between atrophy of the multifidus muscle caused by nerve root compression, herniated nucleus pulposus, and the number of degenerated discs [29]. A computed tomography study found a density change in the paraspinal muscles in patients with lumbar vertebral facet joint osteoarthritis, spondylolisthesis, and disc narrowing [26]. In previous studies, atrophy of the multifidus muscle was found in patients with radiculopathy, due to unilateral disc herniation in comparison with the opposite side [30,31]. Previous studies have produced conflicting results regarding the relationship between the type of disc herniation and the CSA of the paraspinal muscles, and more studies are needed to evaluate this relationship.

Unfortunately, this study did not find any relationship between 25 (OH) D3 levels and the paraspinal muscle’s CSA. However, vitamin D is one of the critical multifunctional mediators in skeletal muscle. In individuals with vitamin D deficiency, the activity of antioxidant enzymes decreases and muscles face more oxidative stress. Vitamin D protects muscles from atrophy [32]. More research is needed to investigate the relationship between vitamin D and the CSAs of the paraspinal muscles. A recent systematic review showed that people with chronic LBP had similar physical activity levels compared to healthy controls [33]. Physical activity is an important mediator of the connective tissue in skeletal muscle. Physical activity increases collagen synthesis in the short term and prevents fibrosis due to age in the long term [34]. In the present study, physical activity level was found to be an influential factor on the CSAs of the paraspinal muscles in patients with nonspecific chronic LBP.

In a recent MRI study, the CSAs of multifidus or erector spine muscles were not found to be associated with the intensity of pain or disability [7]. In a comprehensive review, it was reported that no relationship was found between paraspinal muscles’ CSAs and pain intensity in older adults [35]. While no relationship was found between pain and CSAs in patients with acute LBP, a negative relationship was found between pain and the CSAs in patients with chronic LBP lasting more than 12 months. In the present study, no relationship between the CSAs of the paraspinal muscle and pain intensity or disability could be found. Muscle inhibition and atrophy may directly result from pain, as pain-related nerve inhibition reduces lumbar muscle activity to prevent tissue damage [36]. Moreover, LBP is likely to cause changes in neuromuscular function, which cause changes in muscle histology that appear as atrophy [37]. Fat infiltration replaces muscle with fat, and changing muscle function may not alter muscle CSA [26,38]. The present study did not find a decrease in muscle CSAs. This result may due to its small sample size. Although we did not find any relationship between the CSA and pain or disability, clinicians such as pain physicians who deal with chronic LBP in their daily practice should consider the possibility of structural changes in the paraspinal muscles. Treatment regimens for paraspinal muscles may aid pain physicians in relieving pain, restoring function, and preventing recurrence in patients with chronic LBP. Studies with larger samples are needed to evaluate the relationship between CSAs in the paraspinal muscles and pain and disability.

Liminations of the present study include its cross-sectional design, the lack of a quantitative method to evaluate sarcopenia, as well as the fact that macroscopic or microscopic changes such as fatty infiltration beside the CSAs of the paraspinal muscles were not examined.

We are grateful to all our participants.