Background: Local anesthetic infiltration at the site of a surgical wound is commonly used to control postoperative pain. In this study, we examined the effectiveness of continuous local infiltration at an abdominal surgical site in patients undergoing anterior lumbar interbody fusion (ALIF) surgery.
Methods: Sixty-one patients who underwent ALIF surgery were enrolled. For thirtyone of them, a continuous local anesthetics infiltration system was used at the abdominal site. We collected data regarding the patients’ sleep quality; satisfaction with pain control after surgery; abilities to perform physical tasks and the additional application of opioids in the postoperative 48 hours.
Results: The On-Q system group showed reduced visual analogue scale scores for pain at the surgical site during rest and movement at 0, 12, 24, and 48 hours; and more was satisfied with pain control management at the first postoperative day (7.0 ± 1.2 vs. 6.0 ± 1.4; P = 0.003) and week (8.1 ± 1.6 vs. 7.0 ± 1.8; P = 0.010) than the control group. The number of additional patient-controlled analgesia (PCA) bolus and pethidine injections was lower in the On-Q group (PCA: 3.67 ± 1.35 vs. 4.60 ± 1.88; P = 0.049 and pethidine: 2.09 ± 1.07 vs. 2.73 ± 1.38; P = 0.032). Patients who used the On-Q system performed more diverse activity and achieved earlier ambulation than those in the control group.
Conclusions: Continuous wound infiltration with ropivacaine using an On-Q system may be effective for controlling postoperative pain after ALIF surgery.

Local anesthetic infiltration at the site of a surgical wound has become an increasingly common method for controlling postoperative pain [1]. The method is simple, safe, and may reduce the use of opioids, additional complications during perioperative periods, the duration of hospitalization, and costs [2].

However, the effectiveness of local anesthesia infiltration for lumbar spine surgery has been a point of controversy. Kjærgaard et al. [3] reported in a review article that the clinical significance of this method for lumbar spine surgery was still questionable. In contrast, Perera [4] claimed, in a meta-analysis, that evidence supported the use of intramuscular local anesthetic infiltration to reduce the frequency of analgesics and the time to require first analgesics.

Recently, the number of transabdominal approaches to correct spinal vertebra and discs, such as anterior lumbar interbody fusion (ALIF) and oblique lumbar interbody fusion, has increased [5]. Many articles have reported the effectiveness of local anesthesia infiltration at the surgical site in abdominal surgeries such as colorectal surgery, cholecystectomy, hepatobiliary pancreatic surgery, and caesarean section [6-9]. However, the effectiveness of local anesthetic infiltration at the surgical site in transabdominal spinal surgery remains unknown.

In this study, we examined the effectiveness of local infiltration with ropivacaine at the abdominal surgical site in patients who underwent ALIF surgery.

This is a retrospective case control study, which analyzes the effectiveness of continuous local anesthetics at an abdominal surgical site in patients undergoing ALIF. The study design was approved by the Institutional Review Board of Wooridul Spine Hospital (2019-08-WSH-006) in September 2019.

We retrospectively collected data on patients that had undergone ALIF and posterior pedicle screw fixation under three lumbar segmental levels, due to degenerative lumbar spine disease, who visited the hospital between January and June 2019. All the patients in our study had not responded to non-surgical treatments such as medication, physical therapy, and epidural steroid injection for at least 6 months. The exclusion criteria for this study patients include those who had undergone corrective surgery for deformity such as degenerative scoliosis and kyphosis; had cognitive or psychiatric disease; had known allergic reaction to local anesthetics; used opioids for more than 3 months; or had any contraindications for drugs used for pain control. Patients who met the inclusion criteria were divided into two groups: those who used the continuous local anesthetics infiltration system (On-Q system; Halyard Health, Alpharetta, GA) at the abdominal surgical site, and those who did not (control). We explained the On-Q system, including the benefits, risks, goal, and components to all patients undergoing ALIF surgery in our hospital. The patients that used the On-Q system decided to apply this system by themselves.

The On-Q system consists of an indwelling catheter and an elastomeric pump (Fig. 1). At the end of the ALIF procedure, the surgeon placed the multi-holed catheter between the abdominal muscle fascia and subcutaneous fat tissue. After the catheter was placed through the subcutaneous tissue, it was connected to the elastomeric pump filled with 40 mL of 2% ropivacaine and 60 mL of normal saline. The On-Q pump continuously infused 0.8% ropivacaine at a rate of 2 mL/hr through the indwelling catheter for 2 days. All ALIF surgeries and On-Q pump procedures were performed by one surgeon (HC Lee). After these procedures, the patients were turned to a prone position. If posterior decompression was necessary, the surgeon performed a laminotomy on both sides and posterior fixation with percutaneous pedicle screws at the fusion level. If not, the surgeon only performed percutaneous pedicle screw fixation immediately. 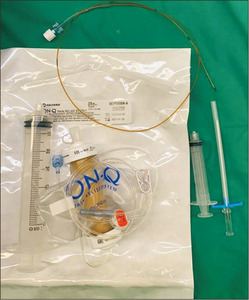 The patient-controlled analgesia (PCA) system was filled with fentanyl 800 mg and nefopam hydrochloride 60 mg. Its total volume was 100 mL; it was set to infuse 2 mL/hr continuously, and deliver 0.5 mL per bolus dose, with a 15 minute lockout time (Accufuser plus®; Woo Young Medical, Jincheon, Korea). Tramadol 37.5 mg, acetaminophen 325 mg, and muscle relaxants were taken by all patients twice a day during hospitalization. They were also administered pethidine (25 mg) for severe pain (above 5 on the visual analogue scale [VAS]).

We collected data regarding pain intensity, as assessed before the operation, upon returning to the recovery room (H0), and at postoperative 12 hours, 24 hours, 48 hours, and 1 week, using a VAS score from 0 (no pain) to 10 (worst pain). We assessed the pain intensity at the abdominal and posterior lumbar surgical sites separately, at rest and during movement (coughing, turning, or walking). The sleep quality of the patients was estimated during the postoperative first and second nights and at 1 week using a numeric rating scale (NRS) from 0 (very poor, not sleeping for even a moment the previous night) to 10 (excellent, best sleep, as good as before the occurrence of pain), so as their satisfaction with the postoperative pain management on the first day, second day, and first week also using an NRS from 0 (no satisfaction) to 10 (excellent satisfaction in regards to pain).

We collected data regarding patients’ ability to perform movement tasks with or without assistance, including turning in bed, sitting on the bed, getting out of bed, standing, using the restroom, walking with a walker, walking by themselves, and walking more than 100 meters before the operation and at H0, 12 hours, 24 hours, 48 hours, and 1 week. Assistance with postoperative actions was defined as the state of the patient’s need for help from nurses or caregivers in performing their actions. We also recorded the numbers of bolus used with the PCA system and the administrations of pethidine in the postoperative 48 hours.

During the study period, 61 patients received ALIF surgery. Among them, 31 chose to use the continuous local infiltration system (On-Q group), while the others did not (n = 30, control group). The demographic characteristics of each groups are shown in Table 1. The preoperative diagnoses, fusion levels, and the trials of posterior decompression did not differ significantly between the groups. The severity of preoperative back pain and leg pain was not significantly different between the groups. Among perioperative parameters such as estimated blood loss, duration of operation and anesthesia, transfusion, and the total volume of colloid or crystalloid fluid, only the total volume of colloid was greater in the control group. The operative times of the control group were longer than those of the On-Q group, but the difference was not statistically significant (189.1 ± 167.6 252.3 ± 133.3; = 0.109). Because of this, more colloid fluid was used in the control group (517.7 ± 106.9 605.0 ± 181.2; = 0.025, Table 1).

Table 1 . The demographic characters of the patients.

The VAS scores for pain at the surgical site during resting and movement were lower in the ON-Q group at H0 and at 12, 24, and 48 hours. Use of the On-Q system did not affect the intensity of pain at the abdominal lesion 1 week after the operation. The intensity of pain at posterior surgical sites (percutaneous pedicle screw or decompression) was also not affected by use of the On-Q system (Table 2, Fig. 2). Patients in the control group pushed the button on the PCA system for a bolus injection more frequently than those in the On-Q group (3.67 ± 1.35 4.60 ± 1.88; = 0.049). The number of injections of pethidine in the On-Q group was lower than that in the control group (2.09 ± 1.07 2.73 ± 1.38; = 0.032) (Table 3, Fig. 3). The complication rates of the PCA system did not differ significantly between the two groups.

Table 2 . The presentation of pain. 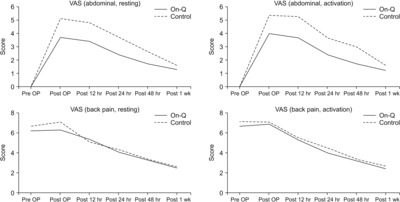 Figure 2. Visual analoge scale (VAS) score for pain at the abdomanial site and back lesion at postoperative 1 week.

Table 5 . Performance state by self.

We reviewed all patients’ medical records for 3 months after the operation. There were no reports of complications related to the On-Q system such as local fluid collection, infections, or skin redness at the insertion site.

We investigated the effectiveness of a continuous local infiltration system using ropivacaine at the surgical site in patients who underwent ALIF surgery. Our findings revealed that this system may potentially be used to control postoperative pain.

Relieving postoperative pain has become a major component in the care of patients who have undergone lumbosacral fusion [10]. A study by Hopf et al. [11] revealed that postoperative pain was exacerbated by increasing inflammatory factors in the surrounding tissue and the catecholamine level, resulting in insufficient wound perfusion and circulation. Wound infiltration with local anesthetics alleviates pain and promotes the wound-healing process by increasing perfusion and oxygenation at the surgical site [10].

Another hypothesis is that local continuous anesthesia infiltration reduces postoperative pain via modification of the central nervous system (CNS) [11]. Peripheral tissue damage triggered two types of CNS activation pathway. The first pathway, central sensitization, was activated by nociceptive afferent input due to operative tissue damage. This nociceptive stimulation lead to over-activation of spinal cord neurons. This hyper-activation results in an increase in the postoperative pain response. The other pathway passed through group C nerve fibers. The postoperative pain excited the dorsal horn of the spinal cord, and this response increased the severity of the pain. As a result, the wound infiltration of local anesthesia reduced the postoperative pain by increasing perfusions, elevating oxygenation and blocking the central nociceptic pathways along with peripheral C-fibers. The continuous wound infiltration system prolonged these effects for 2 days after surgery.

Ropivacaine is the propyl analogue of bupivacaine. It has a longer duration of action than bupivacaine and also inhibits the inflow of sodium in nerve fibers. Ropivacaine is less lipophilic than bupivacaine, so it has a lower tendency to penetrate large myelinated motor neuron fibers. As such, ropivacaine is used for differential sensory blockage and has fewer side effects involving the CNS and the heart [12].

There were only two articles, by Greeze et al. [18] and Milligan et al. [19], that reported the effect of postoperative wound infiltration with local analgesics. These articles showed no statistically significant differences between the trial and control groups regarding the time to the first mobilization after surgery. In contrast, our study reported that patients using the On-Q system were more active and performed activities such as sitting, standing, and walking sooner than those in the control group. We think that the On-Q system decreased postoperative pain at the abdominal site; this made it easier for patients to walk, sit, stand, .

Our results revealed that continuous wound infiltration with ropivacaine using the On-Q system may be used to control postoperative pain after ALIF surgery. It may also lead to early mobilization, especially walking. Use of this method may prevent some of the potential side effects associated with reducing activities.

The analgesic efficacy of a single injection of ultrasound-guided retrolaminar paravertebral block for breast surgery: a prospective, randomized, double-blinded study
2020; 33(4): 378-385
Multimodal analgesia with multiple intermittent doses of erector spinae plane block through a catheter after total mastectomy: a retrospective observational study
2019; 32(3): 206-214
Comparison of Differential Analgesic and Adverse Effects of 0.125% and 0.15% Ropivacaine Coadministrated Epidurally with Fentanyl
2001; 14(2): 171-175