As herpes zoster progresses via postherpetic neuralgia (PHN) to well-established PHN, it presents its recalcitrant nature to the treatment. At this point, the well-established PHN is fixed as a non-treatable, but manageable chronic painful neuropathic disorder. This study evaluated the incidence of complete relief from PHN according to PHN duration at their first visit, and the other factors influencing it.

A retrospective chart review was performed on patients with PHN at a university-based pain clinic over 7 years. The responders were defined as patients who had complete relief from pain after 1 year of active treatment. Age, sex, PHN duration at their first visit, dermatomal distribution, and underlying disorders were compared in the responder and non-responder groups. Responders were also compared according to these factors.

Almost 30% of PHN patients received complete relief. Those who sought treatment in a pain clinic before 9 months received a better result.

Patients suffering from postherpetic neuralgia (PHN) commonly ask their doctors when they can discontinue medication or whether they can have complete pain relief. Traditionally, it has been generally accepted that patients over 50 years old have the same incidence, by percentage, of PHN (persistent pain over 4 months after the onset of skin rash) as their numeric age [1]. In addition, well-established postherpetic neuralgia (PHN) is usually defined as pain persisting for more than 6 months after the onset of herpes zoster (HZ) rash [2].

Dermatologists usually meet patients with HZ during the rash progression, from vesicles via pustular lesions and crust to the final resolution of the rash, while pain physicians commonly meet patients with PHN after resolution of the skin rash. Even though the term “well-established PHN” reflects its recalcitrant nature, some patients show a good response to active treatment in clinical observation [2,3].

This study evaluated the incidence of complete relief from PHN over 4 months and well-established PHN over 6 months, as well as the factors influencing it.

A retrospective chart review was performed on patients with PHN at their first visit between 2008 and 2015 at a university-based pain clinic (IRB: 05-2016-161).

The responders were defined as patients who had complete relief of pain at the 1-year follow-up after active treatment. Active treatment in this study was defined as administration of an individual-tolerable maximal dose of both anticonvulsants (gabapentin or pregabalin), for positive neuropathic components, antidepressants (nortriptyline), for negative neuropathic components, and a discontinuation of these medications at the time of complete pain relief after dose-down titration [6,7]. Patient-controlled intravenous analgesia, using nefopam, dexmedetomidine, ketamine, midazolam, ketorolac, and/or morphine, was administered during dose-up titration for oral medication during hospitalization [8,9,10,11]. In addition, the active treatment also included a transforaminal epidural block (to prevent scarring of the dorsal horn and dorsal root ganglia) and a trigeminal nerve or ganglion block, as needed. An exclusion criterion was patients who did not visit again before complete pain relief.

Age, sex, PHN duration at their first visit, dermatomal distribution, and underlying disorders were also compared in the responder and non-responder groups.

1. Mean age was compared in both groups. Both were divided into four groups according to age at their first visit; less than 50, 50–59, 60–69, or 70 years and over. The complete pain relief rate was compared among these age groups.

2. The male/female ratio was compared in both groups. The complete pain relief rate was compared between these sex groups.

5. Underlying disorders were compared in both groups including diabetes mellitus (DM) and cancer with immunosuppressive state.

Age and PHN duration at their first visit were expressed as mean ± standard deviation. Multiple logistic regression modeling was done to find out the odds ratio of predictive factors such as age, sex, and duration of PHN at the patients' first visit. The ratio of responders at 6, 9, 12, 15, 18, and 24 months, were compared using paired comparisons. The duration of PHN at the patients' first visit was compared between the responder and non-responder groups using the student's t-test. A value < 0.05 was considered statistically significant and Bonferroni's correction was done for multiple comparisons. We used the IBM SPSS Statistics software package for Windows (SPSS version 23.0, IBM, Armonk, NY).

Among 117 PHN patients (M/F = 48/69), 35 patients (29.9%) had complete relief from PHN (Table 1, Fig. 1). The result of multiple logistic regression modeling in order to find out the odds ratio of predictive factors such as age, sex, and duration of PHN at the patients' first visit was shown in Table 2.

Almost 30% of PHN patients received complete relief from PHN after active treatment. The duration of PHN at the patients' first visit in the responder group was significantly shorter than that of the non-responder group. Those who sought treatment in a pain clinic before 9 months, received a better result. Factors, such as being less than 60 years old or being female, seemed to be good factors for complete pain relief, however, they did not show any statistical differences. However, factors such as dermatomal distribution and underlying disorders did not show significant differences between the 2 groups in this study due to a lack of enrolled patients.

The mean duration of PHN at the patients' first visit in the responder group was 8.5 months, 6.8 months less than in the non-responder group. Those who visited within 6 and 9 months showed a better result than those of who visited within 12, 15, 18, or over 24 months. The mean duration of PHN at the patients' first visit at the university-based pain clinics may be quite different from country to country according to the national health care or insurance system. Patients who visit relatively early, within 6 months, may have intractable pain which could not be treated at the primary local clinic or secondary general hospital. While patients who visit later, after 1 or 2 years, may have continuous moderate pain which did not respond to treatment, or were dependent on guardians to bring them for treatment.

The mean age of the responder group was 64.3 years, only 2.6 years lower than that of the non-responder group. It seems that the mean age did not affect the incidence of complete relief. Even though there was no statistical difference in this study, younger patients, less than 60 years old, visited earlier and seemed to have better results in this study. It seems that it was easier for younger patients to visit the university-based hospital without the aid of a guardian.

Underlying conditions such as diabetes mellitus and cancer with an immunosuppressive state, known risk factors of PHN [5], were difficult to compare due to the small number of patients in the 2 groups. Further studies are needed.

The limitation of this study was the small number of enrolled patients. The duration between the development of skin rash and the patients' first visit could not be divided by month from the determination of PHN at 4 months after skin rash to well-established PHN from 6 months after skin rash. Therefore, it was difficult to redefine recalcitrant well-established PHN in this study. The underlying conditions, known as risk factors, could also not be examined. The first visit of enrolled PHN patients might show a unique pattern of PHN with a relatively short (less than 6 months) or long (1 or 2 years) duration, because this study was performed in a university-based pain clinic.

Further long-term studies are needed to determine whether non-responders should take medication for the rest of their life or receive spinal cord stimulation at a certain point [14]. The old definition of PHN, pain persisting after the rash has healed (usually after 1 month), has been changed to a new definition in this study, 4 months after the onset of the skin rash. Further studies should determine the outcome of treatment during the gap between 2 and 4 months.

In conclusion, nearly 30% of PHN patients received complete relief from pain. Those who sought treatment earlier, within 9 months, in a pain clinic, received a better result.

Comparison of Age, Duration of PHN, Risk Factors, Underlying Disorders, and Dermatomal Distribution in the Responder and Non-responder Group 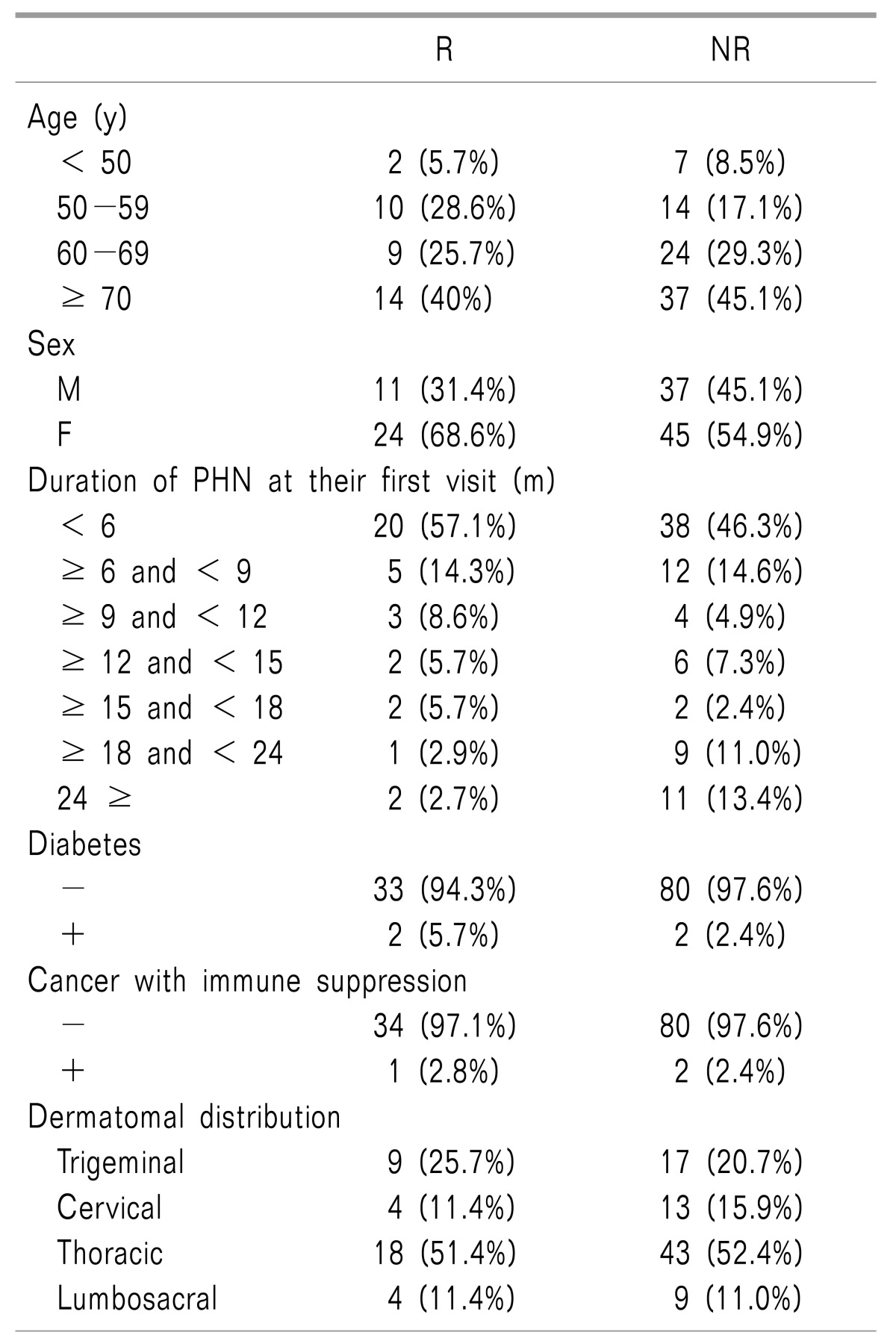