C-arm fluoroscopy equipment is important for interventional pain management and can cause radiation injury to physicians and patients. We compared radiation safety education and efforts to reduce the radiation exposure of pain specialists.

An anonymous survey was conducted of 49 pain physicians who completed the final exam of the Korean Pain Society to become pain specialists in 2016. The questionnaire contained 16 questions. These included the type of hospital they worked at, their position, the degree to which they use the C-arm fluoroscope, their average number of procedures per day, radiation safety education, knowledge of annual maximum permissible radiation doses, utilization ratio of radiation protection equipment, and so on. The 2016 survey contents are referenced in

Statistical analyses were performed on SPSS version 17. Mean differences such as the degree of using the C-arm fluoroscope, utilization ratio of radiation protection equipment, and so on, were analyzed using an independent sample -test. Categorical data such as gender, the type of working hospital, position, radiation safety education, knowledge of annual maximum permissible radiation doses, and so on, were analyzed using chi-square test. A value < 0.05 was considered statistically significant.

Because of the adverse effects of radiation, pain physicians should make several efforts to reduce radiation exposure and be adequately trained to minimize radiation exposure by using ALARA (as low as reasonably achievable) principle [12,13]. The 3 types of Ionizing radiation exposure are primary X-ray beams, scattered X-ray beams, and leakage X-ray beams [5]. The major radiation exposure source to physicians is the scattered X-ray beam. Scattered radiation is spread in all directions from the patient and table, and it is difficult to predict the direction [14]. The scattered exposure dose is higher near the X-ray tube and the scattered levels are inversely proportional to the square of the distance from the irradiated patient and table [5]. Therefore, exposure to radiation can be reduced by positioning physicians farther away from the C-arm fluoroscope and patient. It is recommended that pain physicians perform procedures on the side of the image receptor not the side of the X-ray tube while checking lateral fluoroscopy, and that they should keep their hands away from the irradiated area [15].

There are several protective garments such as the lead apron, goggles or glasses, gloves, and thyroid collar, and use of a large mobile lead acrylic shield to reduce radiation exposure [16]. It is recommended that physicians use more protective devices for their radiation protection [16]. To attenuate over 90% of scattered X-rays, an apron with over 0.5 mm lead equivalent thickness is needed. And the lead acrylic shield has a 1.0-1.5 mm lead equivalent thickness which almost completely attenuates the scattered X-ray beams [5]. A thyroid collar can block radiation for the neck and thyroid, and should be of 0.5 mm lead equivalent thickness. Generally, radiation protective gloves used in pain intervention reduce radiation by 25.8-26.5% [9]. The average rate of wearing the lead apron and thyroid collar were high (97% and 92%, respectively). And there was no one who did not use them in the 2016 survey. The average rate of wearing goggles and gloves were low (38% and 18% respectively). The rate of physicians using the acrylic protector was only 12% (6 out of 49). Despite the high rate of wearing the apron, only 2% of the pain physicians knew the shielding power of the apron they were wearing. Aprons can be divided into 3 types: front – coverage only, full front and back coverage, and two – piece aprons with a wraparound skirt and vest. Full front and back coverage aprons or front and back two–piece aprons are useful for protection from radiation. These styles of apron provide double–barrier thickness in the front area. If the lead equivalent thickness is 0.25 mm, the front side is equal to 0.5 mm lead equivalent thickness [3]. Radiation protective garments could crack or tear over time, and the ability to shield radiation could be reduced. Therefore, all garments should be checked regularly using fluoroscopy [6].

In comparing the 2011 and 2016 surveys, the degree of using low dose mode and pulsed mode was increased significantly in the 2016 survey (Table 5). And the number of pain physicians who know the major radiation exposure source had also significantly increased. Seventy-three percent of respondents found it is necessary to check for damage to radiation protective garments and the number of physicians who check was actually increased. Radiation can have a detrimental effect on pain physicians who use C-arm fluoroscopy. The extent of the adverse effects of radiation on the human body correspond to the amount of accumulated radiation [18]. Those adverse effects appeared in parenchymal cells, structural cells, and vascular tissue. Continuous radiation exposure to the skin can result in erythema, blistering, ulceration, and necrosis. The radiation threshold dose and skin manifestations are shown in the Table 6 [19]. However, physicians cannot see their accumulation of radiation exposure. The radiation can also induce cataracts and many types of cancer. Radiation-induced cancer occurs more in the skin, gastrointestinal tract, lungs, breast, and thyroid [20,21]. Therefore, protection and checking radiation exposure are important to physicians. The percentage using a dosimeter increased significantly from 7% of physicians in 2011 to 39% in 2016. However, there was no significant difference in the various efforts at radiation protection and radiation safety knowledge.

There are some limitations to this study. In order to clearly compare the effect of radiation safety education, the survey should have included items asking if the respondent's hospital has adequate radiation protection equipment, such as goggles, thyroid collars, aprons, gloves, lead-acrylic protectors and dosimeters. The reason for low utilization of radiation protective equipment and dosimeters may be that the hospital was not fully equipped, and thus the equipment could not be used by respondents. If there are not enough radiation protective garments in a hospital, it is important to procure enough equipment for the safety of their physicians.

Most respondents in this survey were fellowship trainers. In the near future, similar research on general pain physicians, including the staff of university hospitals, will be helpful in recognizing the actual state of radiation safety awareness in Korea's pain physicians.

Questionnaire about the radiation safety in 2016 survey

The average utilization of radiation protective garments in 2016 survey.

The average utilization of low dose mode and pulsed mode in 2016 survey.

Other efforts to reduce radiation exposure in 2016 survey.

Baseline Characteristics of Respondents for 2016 Questionnaire 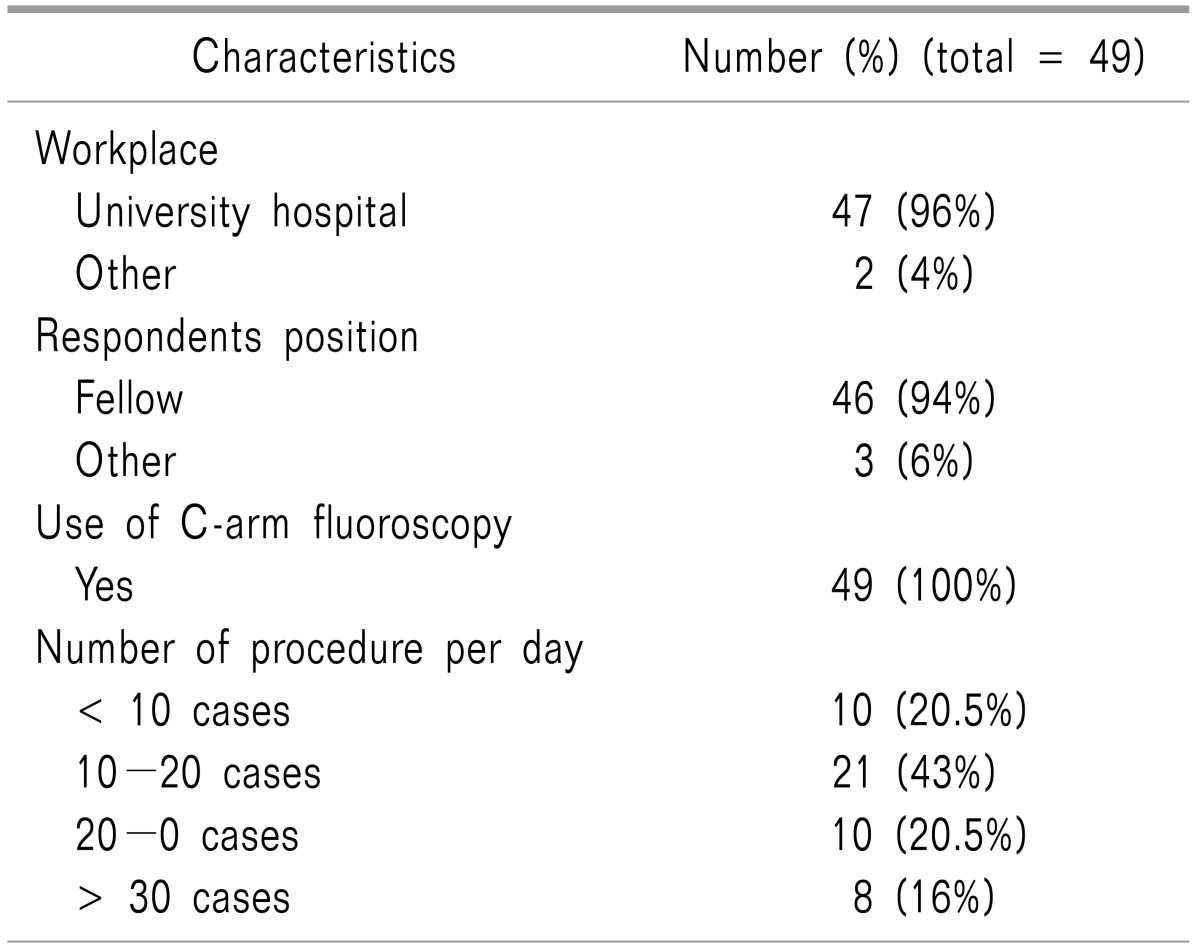 Data from NCRP (National Council on Radiation Protection and Measurements).

Various Data about Radiation Safety in 2011 and 2016 Survey 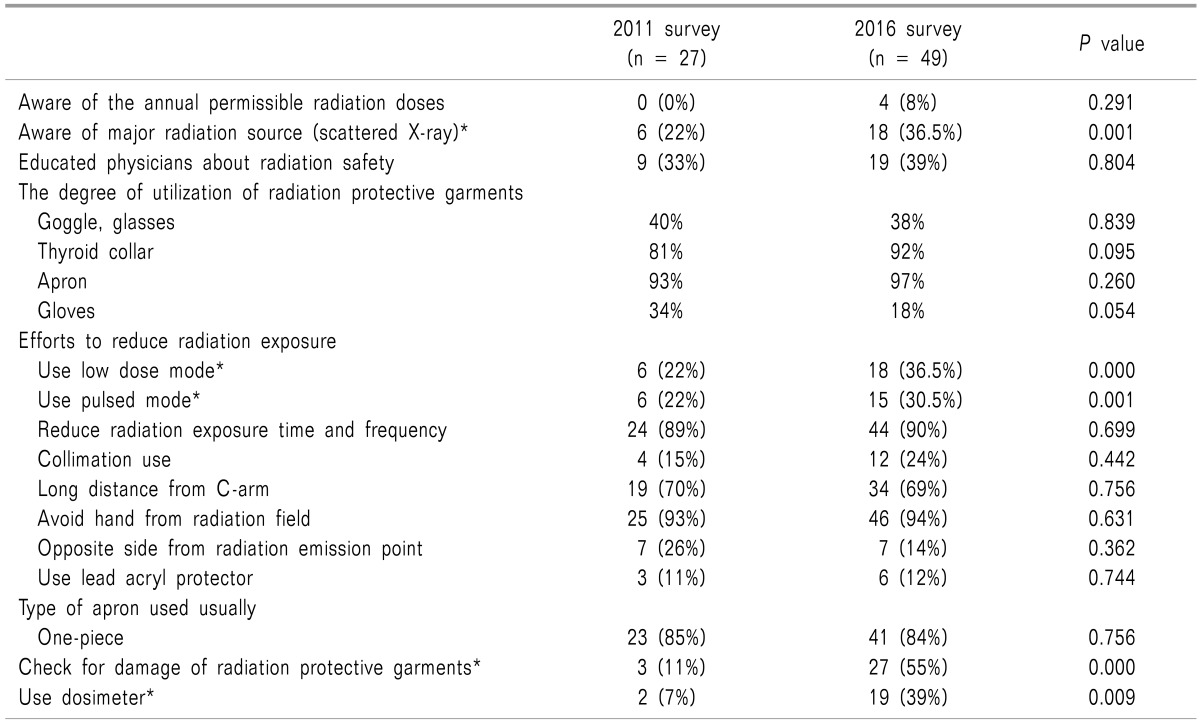 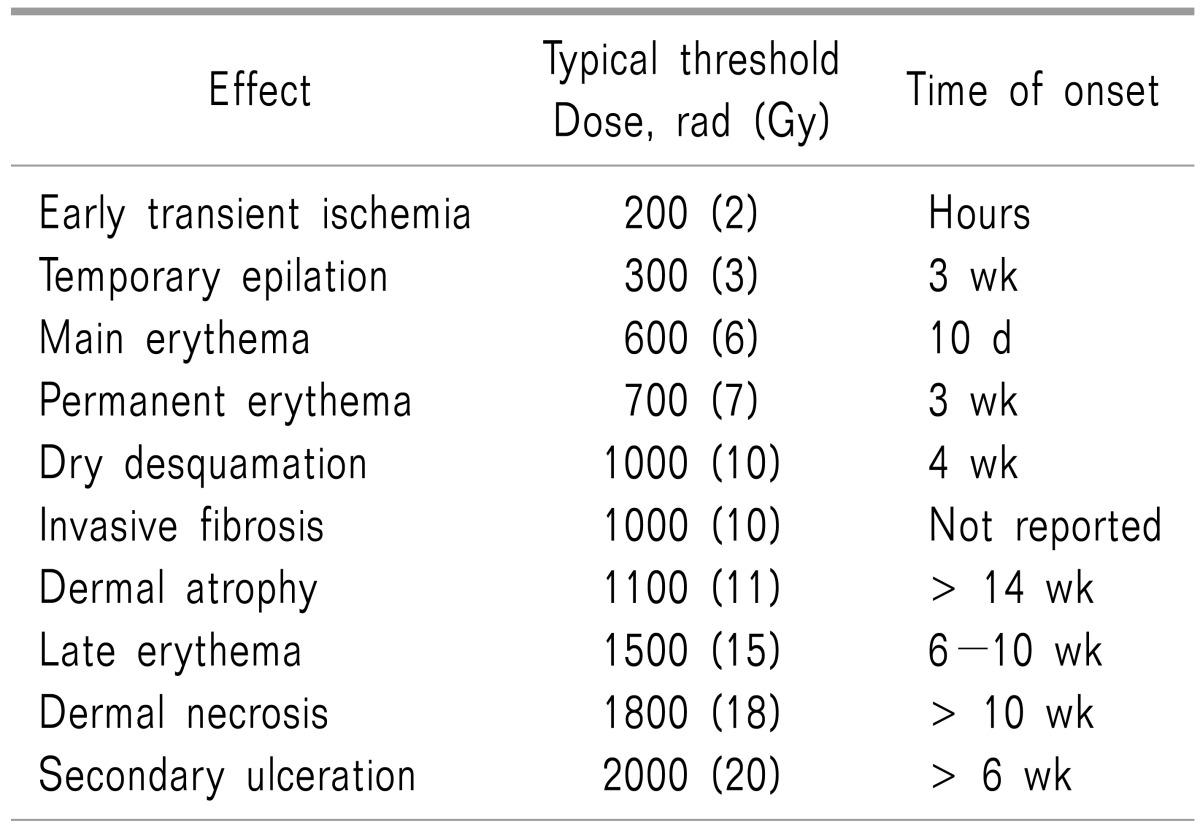 Radiation safety: a focus on lead aprons and thyroid shields in interventional pain management
2018; 31(4): 244-252
Challenges in fibromyalgia diagnosis: from meaning of symptoms to fibromyalgia labeling
2018; 31(3): 147-154
State of education regarding ultrasound-guided interventions during pain fellowships in Korea: a survey of recent fellows
2017; 30(4): 287-295