Statistical analysis is essential in regard to obtaining objective reliability for medical research. However, medical researchers do not have enough statistical knowledge to properly analyze their study data. To help understand and potentially alleviate this problem, we have analyzed the statistical methods and errors of articles published in the (), with the intention to improve the statistical quality of the journal.

All the articles, except case reports and editorials, published from 2004 to 2008 in the were reviewed. The types of applied statistical methods and errors in the articles were evaluated.

One hundred and thirty-nine original articles were reviewed. Inferential statistics and descriptive statistics were used in 119 papers and 20 papers, respectively. Only 20.9% of the papers were free from statistical errors. The most commonly adopted statistical method was the t-test (21.0%) followed by the chi-square test (15.9%). Errors of omission were encountered 101 times in 70 papers. Among the errors of omission, "no statistics used even though statistical methods were required" was the most common (40.6%). The errors of commission were encountered 165 times in 86 papers, among which "parametric inference for nonparametric data" was the most common (33.9%).

We found various types of statistical errors in the articles published in the . This suggests that meticulous attention should be given not only in the applying statistical procedures but also in the reviewing process to improve the value of the article.

The statistical method of analysis is to collect, arrange, and draw general regularity from data; this is recognized as the most fundamental and universal method to prove soundness of conclusions in all scientific research. Undoubtedly, the statistical method of analysis is important in that the final purpose of medical research is clinical application, since inappropriate statistical techniques may deteriorate the quality of research articles or cause decisive error, thus leading to wrong treatment.

Although rapid progress of the computer programs for statistical analysis in recent times has allowed for convenience in analyzing data, there has been an increased danger in obtaining the wrong results from statistical analysis or misinterpreting the analyzed results if correct understanding of fundamental statistical concepts is lacking [1].

Among the 296 articles published in the , from the first issue of volume 17 in 2004 to the second issue of volume 21 in 2008, excluding 22 editorials and 131 case reports, the targets of this study were 139 articles, out of the 143 original articles, in which statistical analyses were used.

The completed checklists were statistically analyzed with SPSS statistics version 17.0 (SPSS Inc., Chicago, USA) to derive the frequency and percentage of each item.

Out of the 139 target articles, 29 (20.9%) articles were free from statistical errors. From the 110 (79.1%) articles where the statistical analysis was inappropriately applied, the number of errors found according to the statistics checklist (Table 1) was 266 (2.4 time/article).

"Errors of omission" were found 101 times in 70 articles (1.44 time/article). Among these, the most frequent error was "no statistics were used even though statistical methods were required" at 41 times (40.6%), followed by "incomplete description of applied statistical methods" at 24 times (23.8%) (Table 4).

"Errors of commission" were found 165 times in 86 articles (1.92 time/article). Among these, "inadequate description of measures of central tendency or dispersion" was registered at 35 times (21.2%), "incorrect analysis" at 123 times (74.5%), and "unwarranted conclusion" at 7 times (4.2%). Out of the 123 occasions where incorrect statistical analysis was used, "parametric inference for nonparametric data" was the most common error at 56 times (33.9%), followed by "chi-square test on the data with inappropriate sample size" at 24 times (14.5%) (Table 5).

Since 1990s, several academic societies in Korea have investigated the current status of statistics applied in the articles published in their journals [3-7], and the Checklist for Assessing the Methodological and Statistical Validity of Medical Articles [2], has been revised for individual academic societies with the intent of being used for the analysis of the articles [3,5,7]. Also in this study, we used the checklist [2], which has been used many times in previous studies, in analyzing the target articles as objectively as possible.

The occasions where "no statistics were used even though statistical methods were required," was the most frequent item in the "errors of omission," as 41 articles in this study were given these results. One representative example was where different concentrations of a drug were given to individual groups. Although only the difference in means was compared and analyzed for the difference between the effects on the individual groups, the conclusion that "the effect was proportional to the dose of the drug" was made and reported. In such a case, the analytical procedure which can prove the correlation between dose and effect should be carried out in order to make the correct conclusion. Another example is the case where the number of animals or the number of experimental targets was not clearly described; rather, it was described as "5-7 for each group" or "18-20 persons for each group," which is an incorrect description. In addition, cases of "no evidence that described methods were used" were found among the "errors of omission." If a statistical method was actually used, it should be explicitly mentioned. In addition, the statistical method used for each analysis should be precisely classified and described rather than listing the names of statistical methods.

A considerable number of occasions where "incorrect analysis" from the "errors of commission" were verified in this study, including following examples:

First, the errors found in high frequency were "parametric inference for nonparametric data" (33.9%) and "chi-square test on the data with inappropriate sample size" (14.5%). Furthermore, this result is particularly significant for the quality evaluation of not only the individual articles, but also the , since the most frequently used statistical methods in the are the t-test and chisquare test, as mentioned above. In order to reduce such errors, nonparametric statistics should be used or the data should be modified by means of data transformation for the cases where the number of observed data is small, or normal distribution cannot be assumed for the data [8]. Special caution should be taken lest the researcher form completely wrong conclusions by applying parametric inference for nonparametric data without such a process. For a chi-square test in cross-tabulation analysis, it is suggested that if the total sample size is not more than 20, or if more than 20% of the expected frequencies are less than 5, then it is not correct to apply the chi-square test directly; rather, Fisher's exact test must be applied [9].

Third, when comparing the means of three groups or more, although it is necessary to show that there is a group with a different mean by post hoc analysis, the error to conclude that a specific group had a different mean without this process was found in 14 cases. The parametric statistical method used to compare the means of three different groups or more is a one way analysis of variance (ANOVA), of which the null hypothesis is: "The means of all the groups are equal (H0: µ1 = µ2 = µ3 = ··· = µn)." Although it can test whether the means of all the groups are equal or not, it cannot specifically tell which groups have a difference in means among them. Therefore, if there is a difference between groups, it is necessary to check through post hoc analysis which specific group has the difference with others [11].

Fourth, there were three cases where the error of comparing the means on the categorical variables was made. For example, when measuring patients' satisfaction in the three classes of high, moderate, and low, it is not right that the researcher renders arbitrary scores for each class and compares the means, since the variable of patients' satisfaction is one of the categorical variables. In this case, the statistical method for the analysis of categorical variables must be applied. The most fundamental factor in statistical analysis is to understand the types of variables to analyze, because the analytical method to be used is dependent upon the type of scale.

Fifth, the dependence/independence of the variables to analyze is also important. One representative example is the test for paired samples. The paired t-test, which is frequently used in comparing the degree of pain before and after a treatment, should have the same sample size for the two groups since the t-test is supposed to compare the difference of the two dependent groups.

The fact that only 20.9% of the articles published in the from 2004 to 2008 were free of statistical errors does not mean that only 20.9% of the articles are reliable, since we have simply counted the number of errors regardless of the statistical errors that could decisively affect the interpretation of the result in each study.

Considering the analysis of the statistical errors found in other Korean journals, the proportion of the articles where no statistical error was found was 19.0% for the [3], 42.3% for the [5], and 33% for the [12]. In the case of the , the ratio was 3% in 1981, but it was reported that the proportion was increased to 33% in 1990. For the international journals, analysis of the statistical errors of the submitted manuscripts were performed in 1970-80s [13-17], and it was reported that 52% of the target articles included errors in applying statistics [16]. Even a serious case, where only 15% of the articles had no errors in applying statistics, has been reported [16]. To reduce such errors, some of the international journals provide statistics guidelines [18] or checklists [19] for data analysis.

Differentiating the major fatal errors from the minor statistical errors is important, since the former may raise serious questions regarding the validity and reliability of the study. Caution should be paid to avoid making the mistake of devaluating significant academic achievements by taking all types of statistical errors overly seriously, and thus, exaggerating minor errors to an unnecessary extent. Hence, this should be remembered in the reviewing process.

Checklist for Assessing the Statistical Errors of the Articles in the 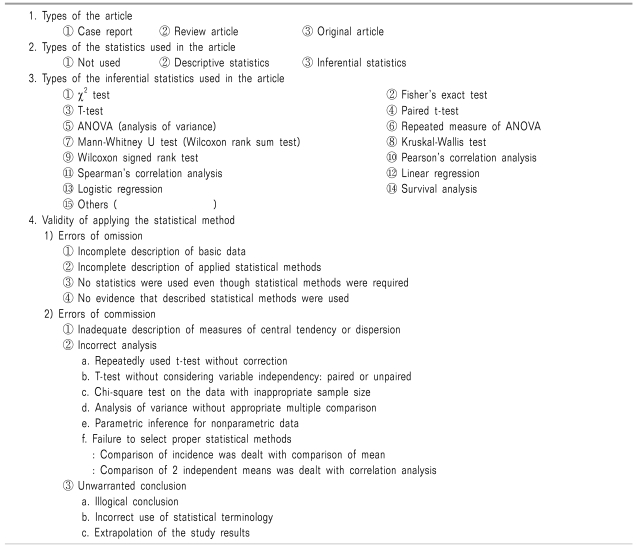 Statistical Methods Used in the

Each number represents the number of articles.

ANOVA: analysis of variance. Each different kind of statistical technique in the same article was counted separately.

The Incidence of Errors of Omission

Each different kind of error in the same article was counted separately. But two or more of the same kind of errors in an article were counted as one.

The Incidence of Errors of Commission

ANOVA: analysis of variances. Each different kind of error in the same article was counted separately. But two or more of the same kind of errors in an article were counted as one.