ITB friction syndrome is presented with discomfort over the anterolateral knee following repetitive friction between the ITB and distal femoral condyle [2]. Local tenderness at the distal attachment of the ITB might be identified on physical examination. A previous review reported that the common MRI findings encompassed thickening of the ITB with increased signal intensity in short tau inversion recovery imaging and peri-ligamentous fluid accumulation [2]. The limitations of MRI include its considerable expense, time spent during the examination, and limited device accessibility.

In our opinion, ultrasound has more advantages than MRI in investigation of ITB friction syndrome. Using high-resolution ultrasound, the ITB pathology can be better delineated than with MRI. For example, in ITB enthesitis, the attachment of the ITB may reveal hypoechoic (Fig. 1A), thickened and hypervascular (Fig. 1B) features with presence of traction spurs (Fig. 1C). In ITB tears (Fig. 1D), a hypoechoic gap may be visualized in the middle of the tendon. Because the syndrome develops after repetitive friction between the ITB and underlying lateral femoral condyle, the investigators may identify distension and hypervascularity of the nearby bursa (Fig. 2A, B). Furthermore, ultrasound allows dynamic assessment, which is helpful for recognizing the abnormal gliding pattern of the ITB during knee flexion and extension. Like MRI, the thickness and cross-sectional area of the ITB can be measured by using ultrasound imaging (Fig. 2C, D). Considering the aforementioned benefits, we suggest ultrasound should be prioritized as the first line imaging tool for assessment of ITB friction syndrome. 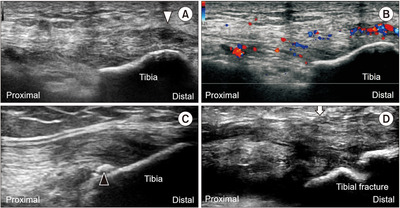