There have been few studies about pain using a big data. The purpose of this study was to identify the prevalence of pain, and trends of pain associated with chronic diseases and personal out-of-pocket medical expenditures over time.

Subjects were 58,151 individuals, using the Korea Health Panel from 2009 to 2013. Chi-square and multinomial logistic regression were conducted to identify the prevalence and odds ratios (ORs) of pain. Repeated measures ANOVA was used to find the trend over these 5 years.

The pain prevalence was 29.8%. The numbers of chronic diseases and the personal out-of-pocket medical expenditures revealed increasing trends annually, especially in those with pain. Therefore, to eliminate and alleviate the pain, there needs to be further study for developing a systemic approach.

Pain is an unpleasant sensation and emotional experience due to actual or potential tissue injury [1]. Chronic pain can limit daily life in the workplace and home, and reduced physical mobility. In addition, it decreases productivity due to declines in job performance. Chronic pain affects the economy negatively, deteriorates mental health, and induces discomfort to decrease quality of life [2,3]. So, chronic pain is usually used as an indicator to measure quality of life. There is an increased interest about pain in the medical field all over the world. In 2004, the WHO defined Dec. 11th as ‘The first global day against pain’ [4].

The biggest reason for visiting the hospital is pain [5,6,7]. Therefore, there needs to be an academic interest in pain prevention, management, treatment, and rehabilitation beforehand. Nonetheless, there are a lot of people, who think that pain is only a symptom. However, chronic pain can be not only a symptom, but also a disease.

It is difficult for patients to explain their pain, which has its subjective character. In particular, there are many people who endure pain in Korea because the culture teaches that endurance is virtue. In addition, there are side effects because people use Korean traditional management, health foods, and unverified products due to insufficient knowledge about pain. So medical consumers are attracted to very expensive, unreasonable medical products rather than reasonable and scientific medical treatment [8]. Therefore, it is important to consider that pain is a disease to be treated.

In an era of increasing life span and elderly population, to manage pain, medical policy and providing service become more important. In as of 2012, the expected life span in Korea was 84.6 years for females and 77.9 years in males. Both of them were higher than the mean expected life span in the OECD [9]. It is necessary to avoid social problems arising from patients with pain. Therefore, there is a need to investigate the current status of pain in the Korea population, especially the prevalence and chronic diseases and personal out-of-pocket medical expenditures. However, there were few studies about the representative prevalence of pain using big data [10]. In particular, study of personal out-of-pocket medical expenditures was insufficient. This study aimed to identify the prevalence of pain and medical utilization in Korea using the Korea Health Panel data which is representative of Korea, and to find trends in the numbers of chronic disease and personal out-of-pocket medical expenditures over 5 years.

The study of pain in the population is useful to know what essential medical policy should be. Pain is the main reason people seek medicine [5,6,7]. Eighty-seven percent of Americans visited a doctor for medical advice when they felt pain [5]. In Korea, pain is the most common factor for medical consumer to choose medical treatment. However, pain studies using big data are rare [11]. The subject of this study was the adult population over 18 years old. The questionnaire was about today’s pain, and it classified respondents as having an absence of pain, the presence of mild pain, and the presence of severe pain. So, in this study, pain includes acute and chronic pain.

Prevalence of today’s mild and severe pain was 22.0% and 1.3% in males, respectively, and 33.0% and 2.1% in females. Using multinomial multiple logistic regression after adjusting confounding variables in females, the odds ratios for mild and severe pain were 1.6 (95% CI, 1.5-1.6) and 1.4 (95% CI, 1.2-1.7) ( < 0.0001), respectively. Thus, females had more pain than males. In previous studies, females had more pain and perceived pain more sensitively, and for a longer duration [15,16]. In addition, social and cultural beliefs regarding gender characteristics were determinant factors in pain sensitivity [17,18]. This might also be socio-cultural in Korea, and thus males explained their pain less than females. In addition, using ANCOVA after adjusting for age, personal out-of-pocket medical expenditures of those with mild pain were ￦365,200 in males and ￦457,000 in females ( < 0.0001). Those of individuals with severe pain were ￦472,600 in males and ￦545,700 in females. This was somewhat different from a previous study, which found that males utilize medical institutions more than females [19].

Added to this, pain related variables included family history such as separation/divorce, low education, unpaid work, being in a low-income household, and having a death in the family. In previous studies, socioeconomic factors such as low income, unemployment, and low education were related with pain [8,10,13,24,28], In addition, Gwnagju and Ulsan had the lowest prevalence of pain and Chungcheongbuk-do and Gyeongsanbuk-do had the highest, in Korea. Therefore, there needs to be a substantial exploration of what factors relate to the regional differences in pain prevalence.

The limitations of this study are as follows: First, the panel's questionnaire only considered pain presence, but did not consider pain duration. In addition, mild and severe pain were classified by subjective perception. So the pain information might be limited and falsely labeled. Second, use of alternative medicine is an increasing trend around the world [8]. But this study did not include both general medication and alternative medicine available without prescription. So, there is a possibility that the measured expenditure was less than the real amount spent for pain. Third, this study could not identify the accessibility of medical services and the performance of treatment to explore the difference between the cities and provinces among the pain-related variables.

However, this study had a strong point: First, this study repeatedly measured the same subjects for 5 years. In addition, the prevalences and trends were identified over time. Subjects also represented the general Korean population, not just those who visited a clinic. Second, this study identified personal out-of-pocket medical expenditures for pain. In particular, studies using panel data are few. So, this study can be used as a basic reference for further study. Third, using representative data in Korea, this study identified the pain prevalence related demographic and social characteristics and economic variables, and found some evidence of the necessity of pain management.

In conclusion, the prevalence of mild pain was 28.1% and severe pain was 1.7%. The pain prevalence were higher in females, those who are older, those with chronic disease, those experiencing hospital admission, emergency-room visits, and OPD visits. In numbers of chronic diseases and personal out-of-pocket medical expenditure for 5 years, there were differences according to pain status and also an increasing trend over time. In particular, in Korea, the pain prevalence and medical expenditures will increase because of the aging of the baby boomer generation. Pain will be a hot issue, one of interest for medical policy makers trying to improve health in Korea. Therefore, to achieve reasonable medical management, medical consumer education is needed to produce smart patients.

Demographic Characteristics and Prevalence of Pain 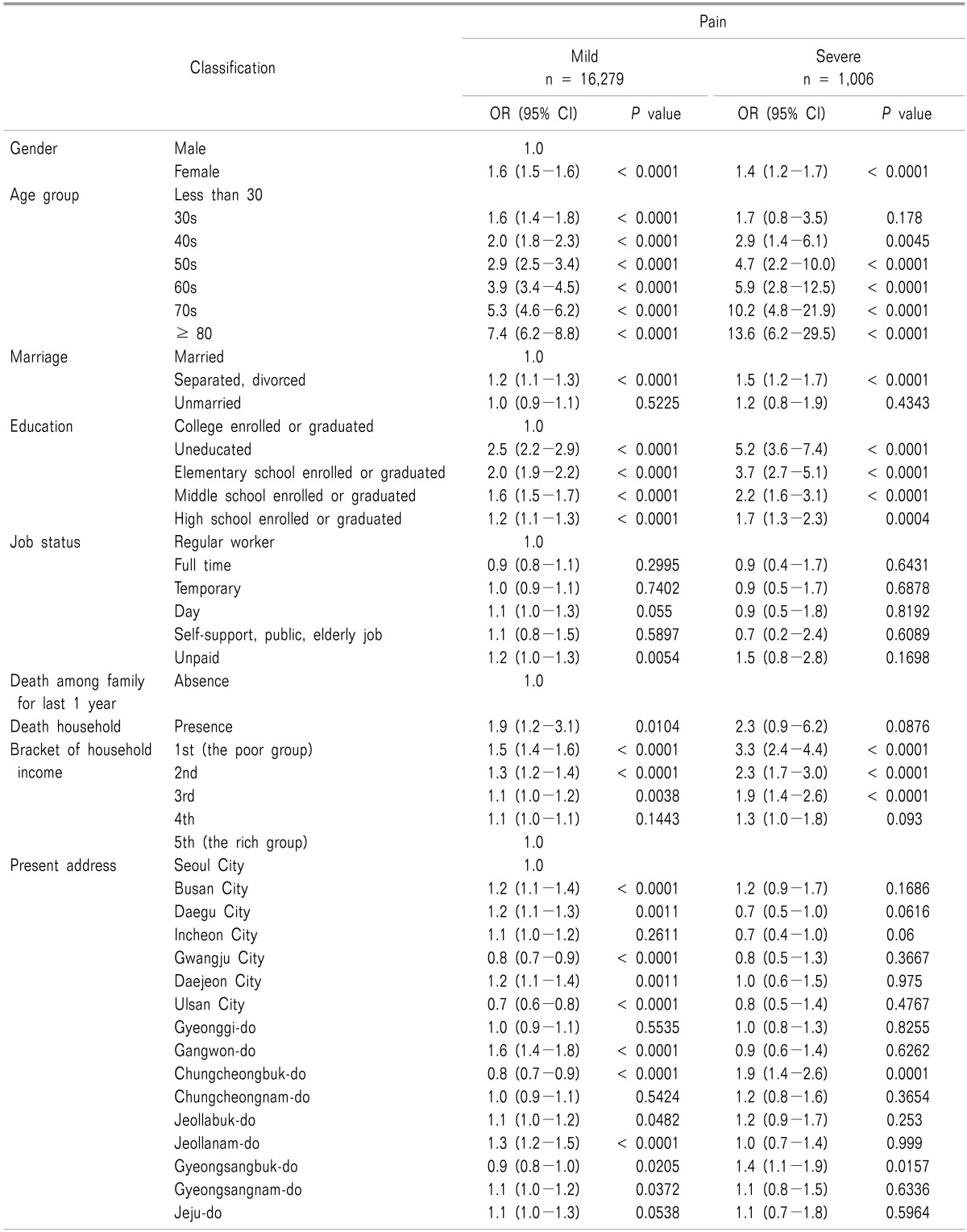 a)For last 1 year, including emergency-room visit, admission and out-patient department visit and prescribed drug. b)Applied inflation rates were 2.94%, 4.03%, 2.19%, and 1.30% according to average inflation South Korea based upon the consumer price index from 2010 to 2013.