The proper concentrations of dextrose and lidocaine in regenerative injection therapy: in vitro study

Prolotherapy is a complementary and alternative treatment for strengthening the laxative tendon and ligament, and therefore relieves pain by using tissue irritant solutions. Solutions used in prolotherapy are considered to be inducing cellular osmotic stress or inflammation, thus stimulating the synthesis of growth factors, and beginning the healing process; however, its mechanism is not fully understood [1,2].

Dextrose solution is popularly used in prolotherapy as an irritant solution, and applied in a concentration from 10%-25%. Because it is painful during injection, local anesthetics, like lidocaine, are usually treated with dextrose solution. Considering the fact that normal blood glucose concentration is about 100 mg/dL (≈ 0.1%), 10%-25% is very high concentration. However, there is no study for evaluating the effects of these concentrations in fibroblasts. The concentration of lidocaine used in prolotherapy is various, dependent on the physician, and usually 0.1%-0.5% is used. However, 0.2% lidocaine induced cell death of almost all human tenofibroblasts [3], so these are also relatively high.

The first purpose of our study was to determine which range of concentrations of dextrose solution and lidocaine would be less cytotoxic in fibroblasts. Second, we investigated the molecular mechanism of fibroblast proliferation, which was induced by dextrose and lidocaine through evaluating the extracellular signal-regulated kinase (Erk) pathway activity. Finally, it was to provide information regarding which concentration would be proper for prolotherapy in the clinical field through an study.

Cell viability was determined by trypan blue exclusion assay at 24 hours after treating the lidocaine and dextrose solutions. Cells were collected using trypsin-EDTA, stained with 0.2% trypan blue solution, and counted in a Neubauer’s cell counting chamber. The result was related to the number of cells in an untreated control, which was considered 100%.

NIH-3T3 cells were plated on 96-well plates with 70,000 cells per well, and 6 parallel wells for each condition. On the next day, the medium was replaced with new medium (control medium, medium with 0.01%-0.2% [0.43-8.54 μM] of lidocaine, medium with 0.1%-10% [0.005-0.5 mM] of dextrose, and medium a with mixture of lidocaine and dextrose). The powder of lidocaine and dextrose were treated, and after that it was mixed with media at each weight together. The degrees of proliferation were measured after 24 hours of drug exposure with the MTT. MTT reagent was added to the wells at a final concentration 0.5 g/L. The cells were allowed to reduce MTT into formazan (4 hr at 37°C), the amount of which was measured spectrophotometrically at a wavelength of 560 nm against the background (650 nm) after lysing the cells in DMSO.

NIH-3T3 cells were seeded into the Culture-Insert 2 well (ibidi GmbH, Gräfelfing, Germany). Cells were incubated for 24 hours and separated from the Culture-Inserts. Closure of the resulting wound was monitored over the next 24 hours. Images of the wound were captured at different time points using a Nikon eclipse Ti-S inverted microscope (Nikon Instruments Inc., Tokyo, Japan). The cell-free area was measured using ImageJ densitometry software (National Institutes of Health, Bethesda, MD). 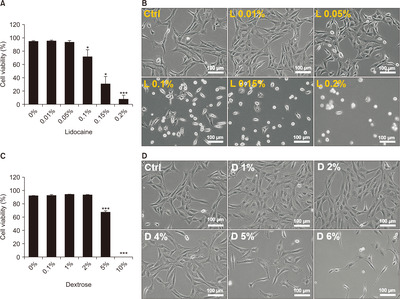 Figure 1. Trypan blue exclusion assay after treating the various concentrations of lidocaine and dextrose for 24 hours in NIH-3T3. Cell viability after treating various concentrations of lidocaine (A), and dextrose (C), and inverted microscopic images, respectively (B: lidocaine, D: dextrose). Medians and standard deviation, n = 8 for each group. Ctrl: control. * < 0.05 and *** < 0.001.

Motile activity, which is an important factor for wound healing, was also increased in 0.01% of lidocaine (L0.01) 1%, and of dextrose (D1), combined treatment of L0.01 and D1 was further increased the cell motility (Fig. 3).

This study demonstrated that relatively lower concentrations of lidocaine and dextrose, compared with concentrations used in clinical practice, induced fibroblast proliferation and increased collagen I synthesis Erk activation. The basic concept of prolotherapy is the regeneration and repair of tissue through initiating the wound healing process by inducing inflammation using irritants [1]. However, we suggest a low concentration of dextrose solution which is not expected to induce excessive inflammation, and can contribute the matrix formation of tissue.

Lidocaine is commonly used in prolotherapy for reliving pain provoked due to the high osmolality of dextrose. It is known that lidocaine induces apoptotic cell death of various types of cells [17-21]. Sung et al. [3] reported there were few live human tenofibroblasts left in 1% lidocaine treatment. Onizuka et al. [22] also showed that the clinical dose of lidocaine, , more than 5 mM (≈ 0.17%) can induce cell death in neurons. Thus, co-treated lidocaine also can affect an adverse effect in fibroblast proliferation or regeneration of tissue. Because 0.2% of lidocaine induced apoptosis in most studies, the concentration of co-treated lidocaine in prolotherapy should be lower than 0.2%. However, there is a lack of information as to which concentration is sufficient for pain relief while not inducing cell death simultaneously. Our study also shows 0.2% lidocaine induces the death of almost all fibroblasts at 24 hours after treatment. However, very low concentrations of lidocaine, instead, increased the fibroblast numbers. To our knowledge, this is the first report of a proliferative effect from low concentrations of lidocaine.

The representative pathway of cell proliferation is the Erk pathway [23]. Although the direct mechanism for glucose-induced cell proliferation is not understood, it is well known that glucose-stimulated cell proliferation takes place through the Erk pathway [24,25]. In order to confirm the proliferative effects of L0.01 and D1, we examined this pathway. Erk was activated distinctly at D1, however, L0.01 also increased phospho-Erk1/2 levels and L0.01 + D1 treatment further elevated it. The inhibition of Erk phosphorylation was also suppressed the proliferative effect of dextrose and lidocaine. It means lidocaine as well as dextrose multiplies the cell numbers through Erk phosphorylation.

The migration of fibroblasts or progenitor cells to the injured site is a key step in wound healing. In our study, L0.01 promoted the motile ability of fibroblast much more than D1. The lower concentration of lidocaine and dextrose were also effective in recruiting circumferential fibroblasts. Although there was more than 10% dextrose-induced cell death in the culture system, we do not know the response and the role of the immune system and how the healing process progresses clearly. According to Sung et al. [3], 0.1% lidocaine induced cell death during 24 hours in human rotator cuff tenofibroblasts, and this is very similar to our results. Although these results are also from an system, it is noticeable for using a human live cell culture. Therefore, proliferation in lower concentrations of lidocaine and dextrose is also considered as meaningful. It is necessary to confirm the effects of 1% dextrose and 0.01% lidocaine for fibroblast proliferation and collagen I synthesis in an system. We do not insist that these concentrations are absolute, but only suggest the question; are very high concentrations of dextrose really helpful for prolotherapy? What should also not be missed here is that the cell death was induced by lower concentrations of lidocaine and dextrose, such as 0.2% and greater than 5%. These concentrations would depend on the species of cells and treatment duration, and the time of absorption after drug injection into the tendon or ligaments of the patient should be considered, because it determines the exposure time of the fibroblasts to the drug. Therefore, it is necessary that well-designed experiments consider these factors.

We examined a simple pathway for fibroblast proliferation and collagen synthesis, however, it is only the first step for evaluating the mechanism of the treatable effects of prolotherapy. We expect prolotherapy to develop into orthodox and conventional medicine, from its current status as complementary and alternative medicine, the accumulation of knowledge fthrough basic research.

This article was presented at the 1st International Congress on Spinal Pain in Gwangju, Korea, 2016.

Ultrasound-guided epidural block in axial spondyloarthritis patients with limited spine mobility: a randomized controlled trial
2021; 34(1): 114-123
Presentation of Neurolytic Effect of 10% Lidocaine after Perineural Ultrasound Guided Injection of a Canine Sciatic Nerve: A Pilot Study
2016; 29(3): 158-163
A Case of Mixed Intravenous Infusion of Ketamine and Lidocaine in the Treatment of Post-herpetic Neuralgia
2003; 16(1): 97-100