It is uncommon for patients who have received a permanent implant to remove the spinal cord stimulator (SCS) after discontinuation of medication in complex regional pain syndrome (CRPS) due to their completely painless state. This study evaluated CRPS patients who successfully removed their SCSs.

This 10-year retrospective study was performed on patients who had received the permanent implantation of an SCS and had removed it 6 months after discontinuation of stimulation, while halting all medications for neuropathic pain. Age, sex, duration of implantation, site and type of CRPS, and their return to work were compared between the removal and non-removal groups.

Even though this study had limited data, younger patients with CRPS type 1 could remove their SCSs within a 5-year period and return to work with complete pain relief.

Traditionally, complex regional pain syndrome has been treated with medication, using an anticonvulsant and an antidepressant with a weak opioid for neuropathic pain, thoracic or lumbar sympathectomy for cold allodynia, and a spinal cord stimulator (SCS), if these treatments have failed.

Use of an SCS for the treatment of CRPS was considered a last resort therapy because of its high cost and level of invasiveness. However, it is now considered earlier (at around 3 months), as soon as more conservative therapies have failed [1].

This study evaluated patients who successfully removed the SCS in CRPS cases retrospectively according to age, sex, type of CRPS, involved extremity, duration between an initiating noxious event to implantation, and duration of implantation of the SCS.

Even though this study had a limited number of data, relatively young patients with CRPS type 1 had a better prognosis for complete pain relief after SCS implantation, and could remove the SCS within a 5-year period (17–59 months) and return to their work.

SCS has been shown to reduce pain and improve quality of life within both a 6-month and 2-year period [4,5]. However, it is difficult for patients who have implanted a permanent SCS to obtain long-term pain coverage for longer than 5 years, even with a successful trial after psychologic assessment [6]. After a gradual reduction and final cessation of medications, the cases where there are no further pain complaints are extremely rare, even after cessation of SCS for 6 months.

Pain characteristics for a good candidate for an SCS are steady, burning, lancinating chronic neuropathic pain, not dull, aching nociceptive pain [11]. In addition, in our clinic, patients with CRPS, a benign musculoskeletal sympathetic-maintained pain, could take an anticonvulsant and antidepressant with only weak opioids (tramadol and codeine), without using strong opioids.

In this study, only relatively young patients in their twenties, with the exception of 1 patient aged 39, had a successful removal of the permanent SCS. Young patients may have greater flexibility returning from the disturbance of the sympathetic nervous system [12].

In addition, all 5 patients (4 students and 1 sailor) continued their work after a brief period of hospitalization during the implantation period. On the contrary, only 5 of 35 patients, who failed to remove the SCS, had jobs.

There are 3 kinds of insurance coverage in Korea: national health, automobile, and workers' accident compensation insurance. Patients with the latter 2 types of insurance do not have to pay their costs. Four of 24 (16.7%) and 1 of 12 (8.3%) patients had a successful removal of their SCSs in the health and industrial accident insurance groups, respectively. However, the differences among types of insurance were not clear because this study had only a limited number of patients.

In Korea, the 3 major health insurance systems require at least these 3 criteria for SCS implantation; 1) the Budapest clinical diagnostic criteria for CRPS, 2) consultation with a psychologist for the evaluation of depression, compensation, or secondary gain, and 3) a medication history for neuropathic pain with maximal dosage of an anticonvulsant and antidepressant for at least 6 months. All implantation cases were fulfilled these criteria.

In our experience, long-term use of strong opioids (especially, the immediate release type) may hinder discontinuation of all medications and achieving a successful removal of SCSs.

The limitations of this study are the limited data of one hospital and an insufficient duration. However, this study proves a good result in young patients with CRPS type 1.

Comparison of Data between the Removal and Non-removal Groups 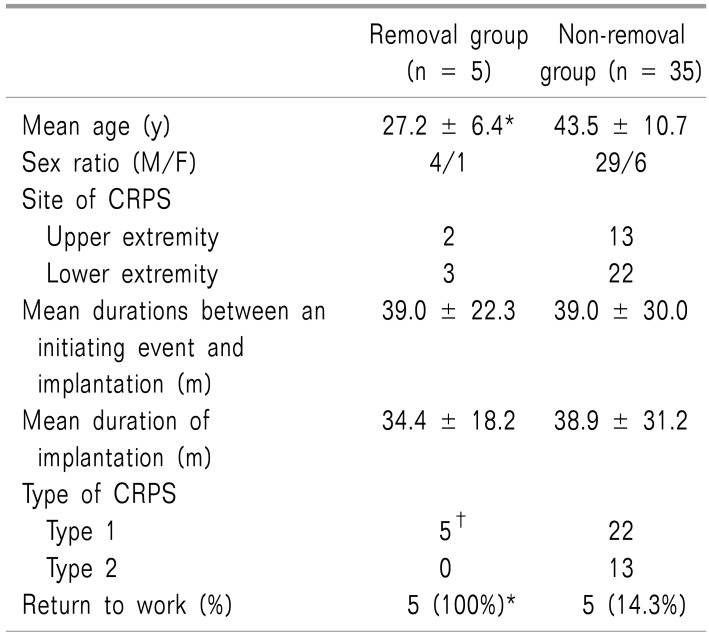